Tusion is a wide village situated on Sharldara River a tributary of the Shakhdara (ending in Khorog, in Gunt River). It is spread in numerous settlements on a part of the Eastern slope of the Ishkashim Range. Its average altitude is around 2 650 m. Though, upper village is closer to 2 900 m. Tusion is roughly located 25 km South-East of Khorog. The Tusion upper village is connected to the Roshtqala-Khorog « main road » with a long and strongly climbing up rough road. Some sources say Greek people, who were part of Alexander the Great army, created Tusion. Locally I heard that the village started with a holy man coming from Tus (Persia). He made life possible by building the first canals to bring water from melting glaciers for domestic needs and fields irrigation. The holy Persian man is still revered in the village. The place where he lived became a religious sanctuary. Is that the shrine mentioned on maps?Like most of Pamiri people, Tusion inhabitants are Ismaelians (a peaceful branch of Shia Islam). Their spiritual leader is the Agha Khan. Pamiri chid (house) has 5 pillars, named after the members of the Holy Family (The Prophet Muhammad, Hazrati Ali, Hazrati Bibi Fotima, Hazrati Hasan and Hazrati Husain). Though, the design of the houses is even more ancient and though references to Zoroastriasm can still be observed.

On August 3, 2013, in the middle of a hot day,coming from Khorog, I got outside the marshrutka in Tusion lower village, with two other men. I am sure these two men were really wondering what I was doing here. They probably considered I was lost. I asked to them and to the employee of the close “magazin” if there was any guesthouse or homestay in the village. The answer was “no.” I had a phone call to Zhandiya and proposed her to give my mobile to the policeman, one of the two men who arrived with me. When I got back my phone, Zhandiya told me the policeman was inviting me to his home, located in the upper village. Shortly after, I really I understood what “upper” was actually meaning. It was so hot; the road was climbing so hard, the altitude and the thirst made my way very tough. 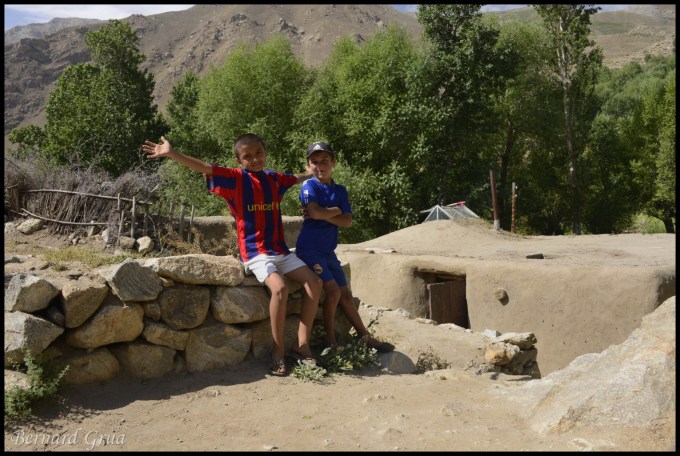 I felt totally stupid while watching to Khushdil, the policeman, who was going so fast with no apparent difficulties. From time to time, he was kindly saying: “Brother, let’s have a rest!” He also explained me that one of his neighbours and friends was an English teacher. After too many (for me) kilometres, after a turn, we saw a roof. He told me: “Moi Dom” (my house).

Khushdil introduced me to his wife Gulsijat and showed me his two children: Sherzod and Bogir. I met with Abduraim (Khushdil father) and his wife, Bibinoz. 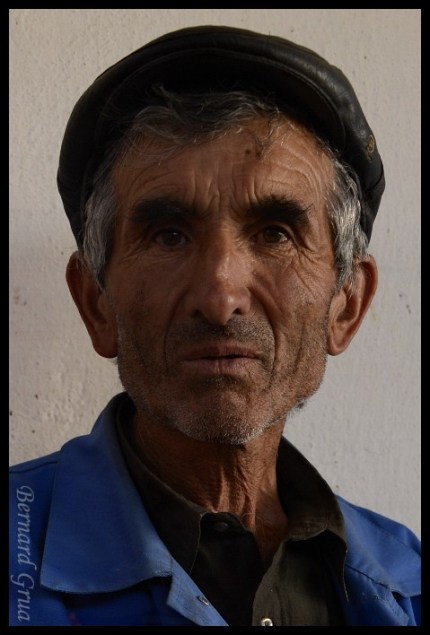 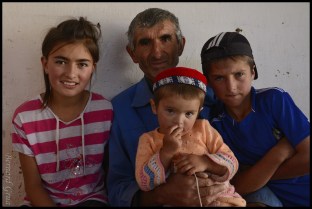 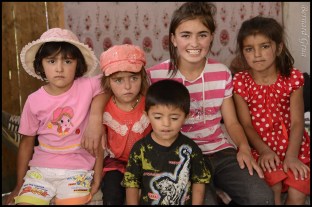 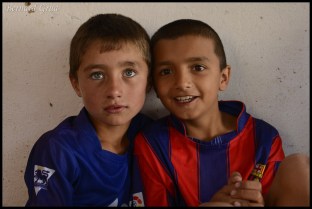 We had lunch together. I tried to answer their questions, using my very poor Russian. Khushdil works in Khorog police station. He is, then, very busy, while he spend a lot of time, everyday walking down or up to and from the main road to catch the marshrutka to the city. Abduraim, the Grand father is such a good man that his home is always crowded, with grand children, nephews and nieces and with kids coming from  other houses.At this time, it was 50°C in Dushanbe, the Tajik Capital city. All parents, who could do it, sent their children to relatives living in the mountains.  I could not remember or even understand the names, which were completely new for me, of all these kids.  However, among them, one, Muiz, appeared amazingly smart and, though very young, fluent in English. He knows many other languages. He became my enthusiastic guide and interpreter.

After lunch, came the English teacher, Davlatmir. He invited me to his house. Once again, I met with very nice and very friendly people: Nan Bakh (his mother), Khimcha (his wife), Toji (the wife of his brother, Khursed), Farzona (his oldest daughter), Khudobakhsh (his son) and Bakhen (his youngest daughter). Khursed, the brother, with whom I did not meet, is a carpenter. He and his wife have no children. But, according to what I saw from Toji, they take great care of Davlatmir and Khimcha children. 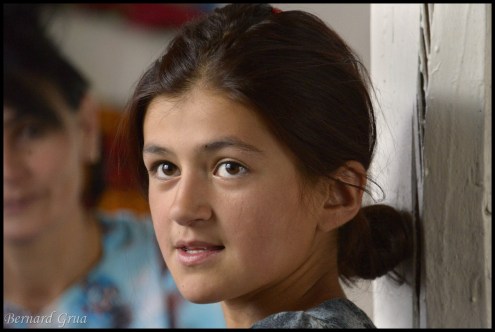 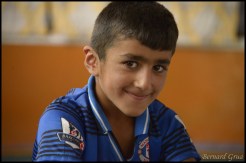 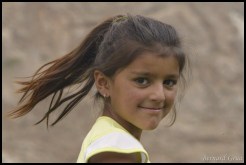 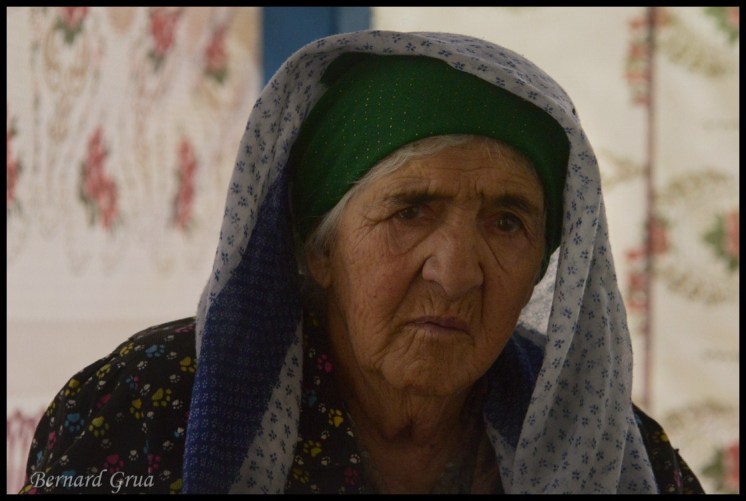 These kids have, then, four parents and a Grand Mother staying in the same house. As a consequence the home is well maintained, full of affections and smiles. It was such a big contrast with what I observed, a few days before, in Afghanistan.

Teacher salary is so low that it is not enough for the family. Family has also to live on its livestock and on its own vegetable production. Most of the summer time is used for manually cutting and carrying grass from the very sloppy mountainous fields, in preparation for winter. Davlatmir said he would make much more money if he would work in Moscow: “But, then, who wild teach the children of Pamir? What would become our culture and our country?” It is very frequent to hear, in Pamir, that the father, the brother, the uncle and/or the son work in Moscow. It, likely, has a strong impact on the social and material balance of the society. From my little side, I could notice that Tajik fields, though in a good shape, are not so well maintained than those I have seen in Wakhan (Afghanistan), which really look like gardens. May be one explanation is to be found in the fact that the Wakhi population is more conservative and more rural than the Tajik one? Maybe, it is also connected with the Tajik men exodus to Moscow? Adding to taking care of fields, community work of men population is of great importance for maintaining the kilometres of canals to provide water supply and irrigation.Without this complex system, no life and no agriculture are possible in Tusion and in other villages of Pamir. Recent international surveys, in Tusion, also evidenced that unexpected accumulation of water in specific places, under the fields, located above houses, could lead to terrible land-slidings. Only the maintenance of irrigation system and an appropriate allocation of water, can prevent a disaster.

The football match between summit

Nevertheless, it was not time for grass. It was time for football! The little girls chose their best dresses.
The young boys dressed with complete football equipment (sometimes, football shoes were,however, missing). We walked with groups of people coming from lower settlements to the “stadium” located at the highest point of the village.

The“stadium” is a totally flat natural meadow surrounded by the giant tribunes of mountains. When the village had horses, it was the place for horse polo. As I heard: “We lost our horses. Gas is too expensive for our cars. We have to walk.”  Now, the “stadium” is used for livestock pasture and for football. 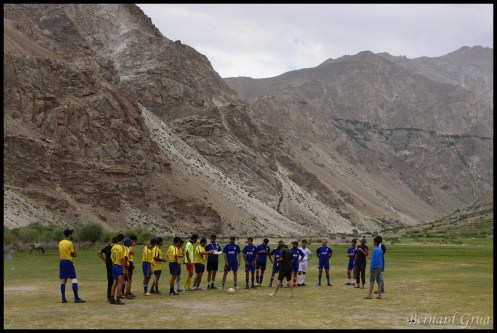 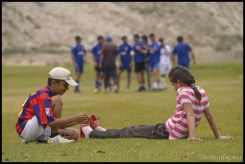 Muiz and his cousin, Davlatmir talking with « our » team, the blue one Football tournament in mountains Pamiri people, Tusion, Badakhshan, Tajikistan 03/08/2013 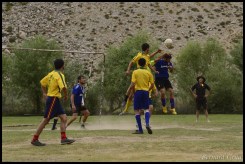 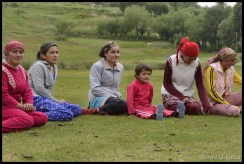 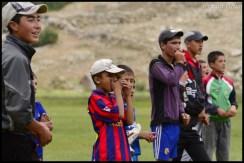 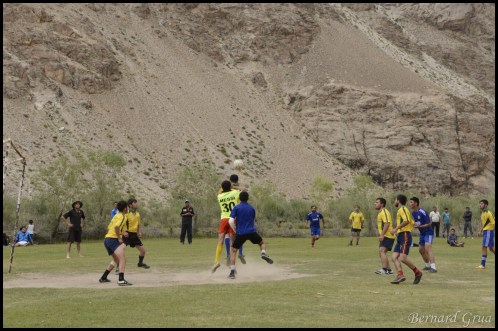 The event on this very day was part of the Tusion big football tournament, involving teams of each settlement. I attended the “semi-final” between the team of “my” settlement, in blue, and the team of another settlement, in yellow.
During summer, Tusion livestock, including yaks, is kept in remote altitude jailoos. However, donkeys and some cows stay close to the village. That’s why shepherds had to control animals to prevent them interfering with the game.  Supporters were boys and men, girls and women. Young boys brought water from river to players. The match was disputed with a lot of energy and with a real professionalism.  Altitude, close to 3000 m was not an issue for them. Later, we went back to Davlatmir home where we had a rest and another tea. Then, it was time for diner at Khushdil and Abduraim home. 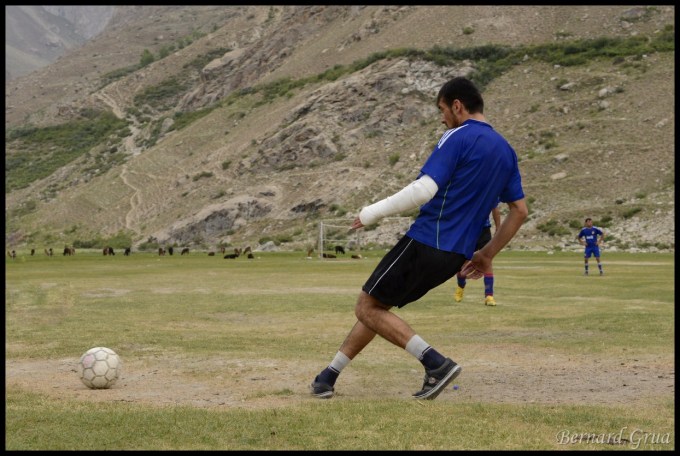 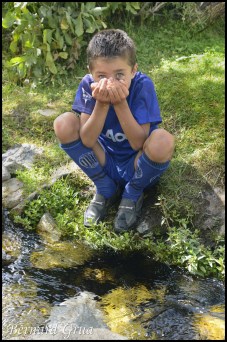 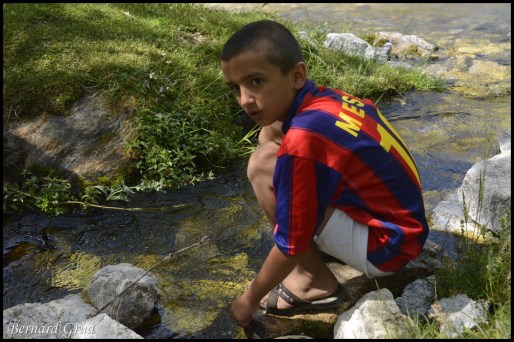 I slept in the veranda and I could say good-bye to Khushdil who, in very early morning, was walking down to main road for reaching Khorog and his job. Breeding horses in altitude villages is expensive while they need a lot of hay in a long winter. However, no doubt that with a horse Khushdil could save a lot of time to go and to come back from his job. After breakfast, Muiz and numerous young boys showed me their favourite spots along the river. 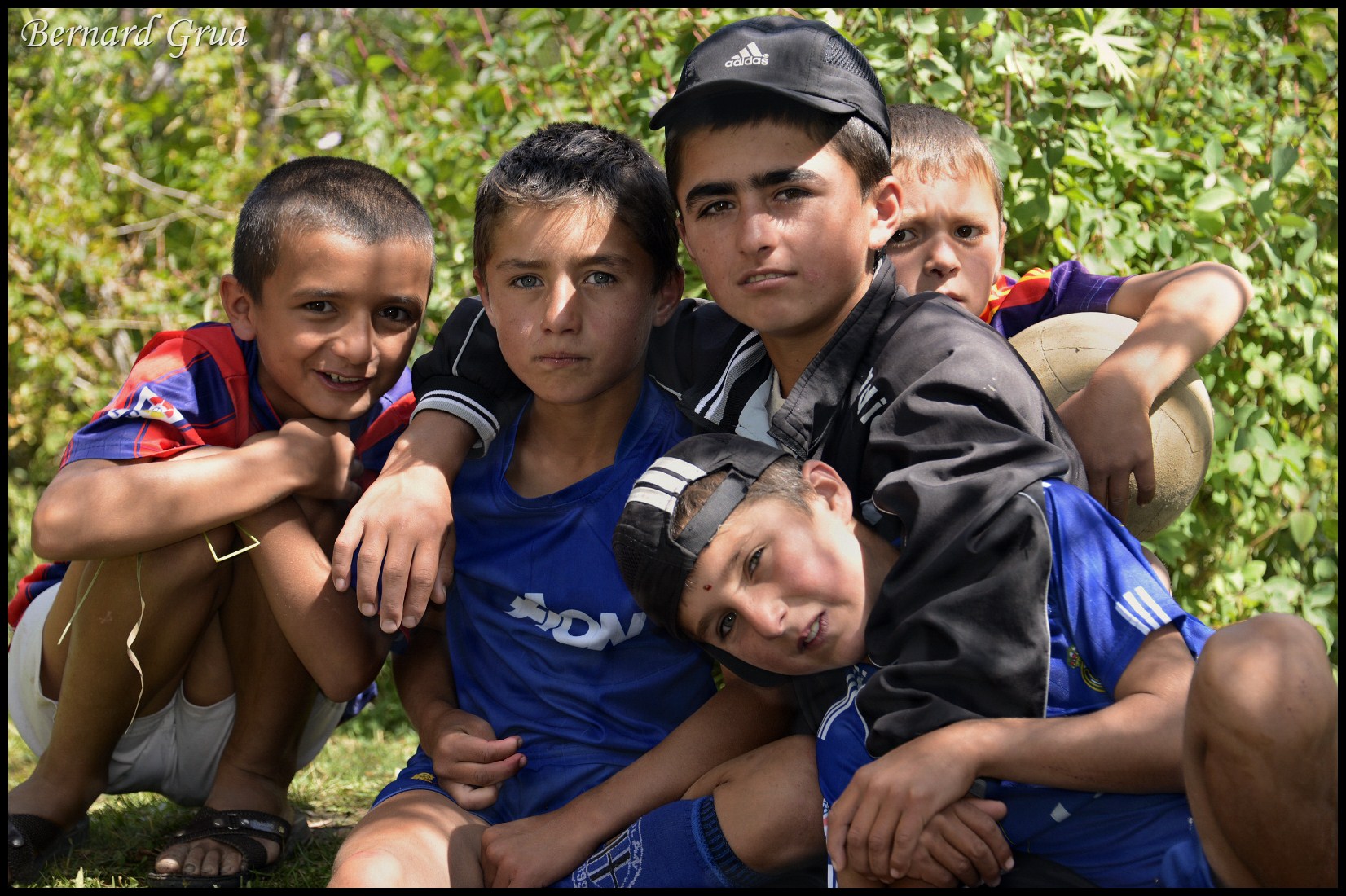 While walking with Muiz and one of his cousins, I was invited by an old man to drink tea in his house. Then, we had a pleasant walk before we met with Abduraim cutting grass with a lady. The heat was hot. We went back to home with Abduraim and with kids. We probably talked and laughed during three hours. For those who know my Russian this could be considered as incredible. However, I promise, it is true. I think it is an evidence of the empathy developed by Abduraim who is such a good man. Abduraim during his professional life was a “tractorist”. He is one of the very few senior people who did not tell me that everything was better at the soviet time. Comparing past and present situation, his opinion is quite balanced. During our conversations, I was surprised how big was his knowledge about European countries. He said this comes from television. I think, this is only possible because of his interest in other people.

Working in the fields

Then, it was time to visit Davlatmir cutting grass with Toji, his sister in law, Khudobakhsh, his son, and Bakhen, his youngest daughter. I could realize how many efforts they have to do for a very small result. For sure, they do not complain but they have a hard life. It was not possible to work in the heat any more. 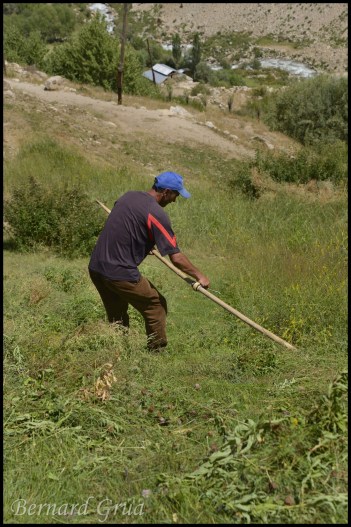 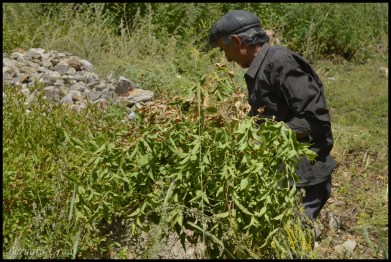 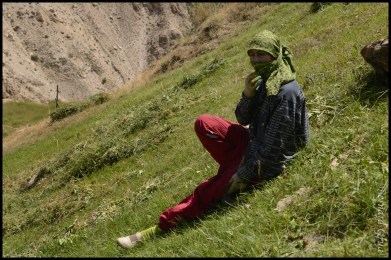 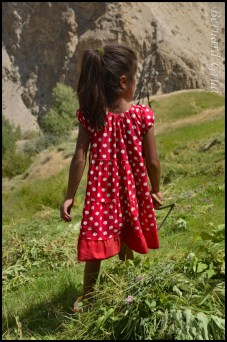 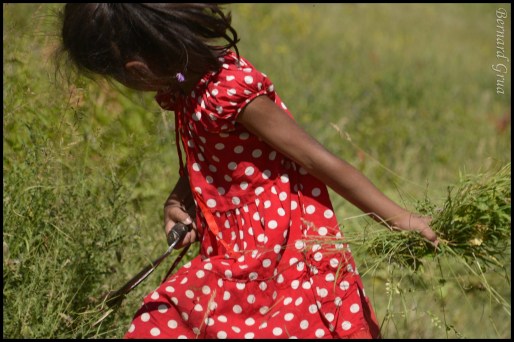 Once again, Davlatmir offered me one of his cigarettes, his own tobacco production rolled in a piece of newspaper, and we had tea in his house, with Toji and with Muiz.
For me, it was time to leave. Davlatmir, his daughter Bakhen and Muiz went with me to Abduraim home to say good-bye to his family. Abduraim and Davlatmir, both, proposed me to stay some more days. While I did not want to bother them, I refused. I still do not know if it was the right decision. I started to walk down to main road. I had the company of Davlatmir and Bakhen until the crossroad leading to heir house.
My short stay in Tusion was one of the most authentic and one of the friendliest experiences I got in Central Asia. I will never forget the wonderful people I met there.

Now, I have a personal reflexion. I do not know if I should disclose it. Anyway, let’s do it carefully. Tusion has no tourist facilities. However, Tusion is quite accessible from Khorog. Tusion is quiet and beautiful. People are hospitable. I know that tourism can be very spoiling if not properly managed locally and if visitors do not act with care. However,it could supplement local income. Staying at Abduraim home is a great experience for those who speak some Russian. Staying at Davlatmir home is great, too. Moreover, Davlatmir speaks English, which makes everything easier. Davlatmir knows many things about local history, culture and geography. It is possible to learn a lot from him. Added to immediate benefits, international relations could also help Davlatmir to get external support or sponsoring for his school, to have native English speaking people visiting his classes, to partner his classes with foreign ones, and, who knows?, to develop international exchange for students. 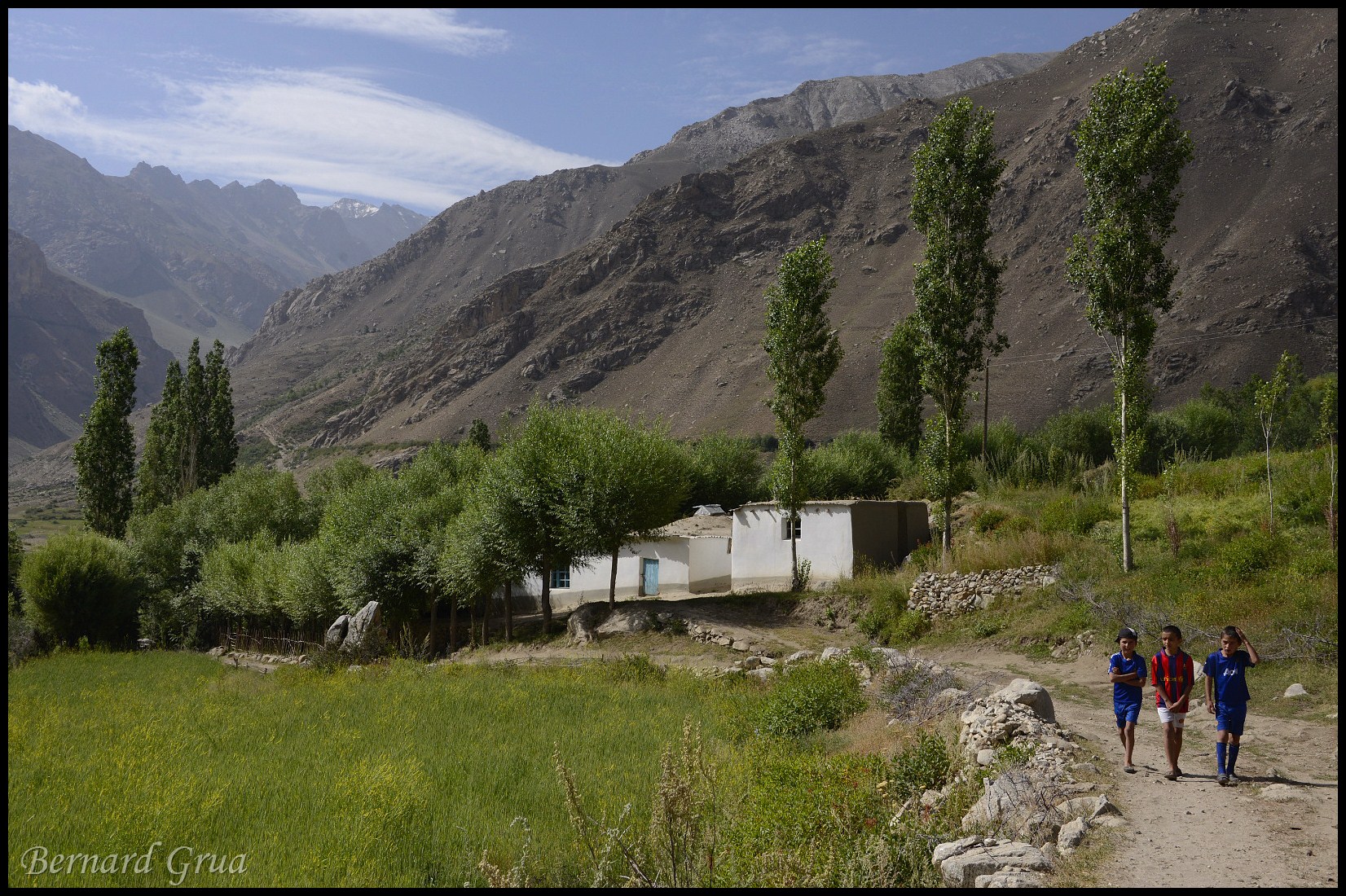 Some people from PECTA could consider visiting these two houses and provide (very few) advices, while everything is already perfect. Then, in Khorog, PECTA could select some foreign visitors, and propose them to stay in Tusion, if PECTA people consider these tourists would have a responsible behaviour.

More articles about the same topics by Bernard Grua